DIY (do it yourself) Batman Costume: Chest Plate 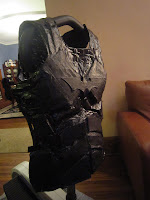 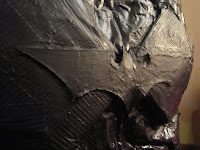 This was by far the most difficult thing to make so far for the costume, but it is essentially the same concept as the batman mask taken to a larger level.  Very satisfying to have finished, and I'm quite happy with the results.  The chest plate (or more correctly breastplate) is made primarily of duct tape (silver and black) and paper grocery bags.  I also used a plastic trash bag, some 14 gauge Cerro wire (any flexible wire would work, and is optional anyways), cardboard, and Plasti Dip.  The rest of the costume is here 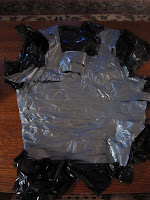 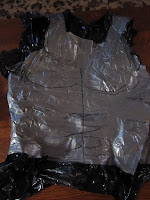 To start, I cut head and arm holes in a plastic trash bag, put it on, and then wrapped duct tape around my chest (a few layers).  I also added strips over my shoulders.  At this point, it didn't look like much.  Unlike the helmet, which was able to hold its own form at this point, the chest plate is so large it just collapses into a pancake.  Unfortunately I did not make this initial form long enough, and later in the project I had to extend the front of the chest plate, so I definitely recommend wrapping from just below your neck to the top of your hips to make sure the torso is long enough.  To get out of the duct tape, you can use a scissors to cut along the sides from the bottom to under your arms (carefully of course).  This leaves the front and back separated except for over the shoulders.  Now that you have the basic shape, draw on where you want the accents (muscles) to go.  You may need to put the chest plate back on to figure out exactly where things need to go. 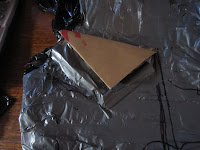 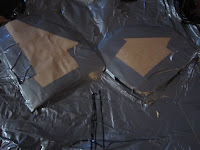 To make the muscle accents, fold pieces of grocery bag into the desired shapes, and then cover with duct tape.  It may take a few pieces to get enough depth.  You can keep the paper fairly loosely folded (it doesn’t need to be squished together) and it will still keep form once the duct tape is put over it.  If you have lots of black duct tape, I would recommend using it here so that you don’t have to go over the silver duct tape again later.  If you don’t have a ton of black duct tape (it’s more expensive usually), keep using silver duct tape for now. 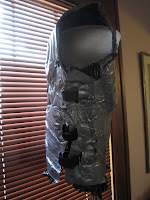 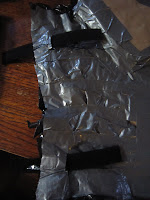 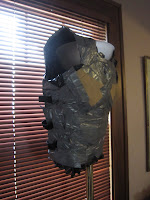 I used about three inches of Velcro for each fastener.  You will need to make multiple fasteners on each side.  If you don’t have them every few inches, the duct tape will warp out of shape.  I ended up with three to a side; one just below the arm, one in the middle, and one by the bottom.  I reinforced the duct tape between the edge and the fastener to make sure it didn’t stretch or break. 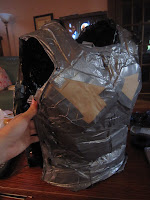 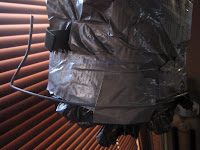 Once the fasteners were in, I realized my chest plate still did not have the structural integrity I was hoping for.  To remedy this, I bought some 14 gauge Cerro wire (electrical wiring with a rubber coating) and essentially made a frame for the chest plate.  The frame went along all the edges of the chest plate, plus down the center line on the front of the plate.  I simply bent the wire into roughly the shape I needed, duct taped it onto the frame, and then adjusted the entire chest plate to the correct shape.  The wire is very flexible, which is important since it requires tinkering to get the right shape.  I also at this point made an extension to the front half of the chest plate because mine was not long enough to actually accommodate all the muscle pieces and stopped somewhere in the middle of my belly. 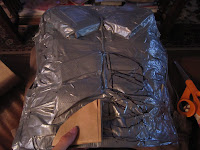 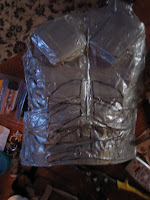 Once the chest plate had been lengthened and the wire had been set in place, it was time to draw on the next muscle pieces.  I added in the six abdominal muscles, and then took a moment to realize I had made the pectorals into very sharp diamond shapes. 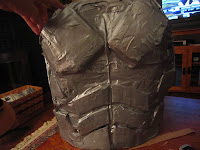 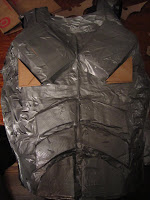 This was remedied with some extra grocery bag extensions, and I also added in two oblique muscles on either side. 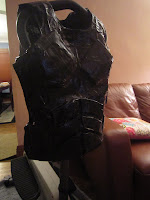 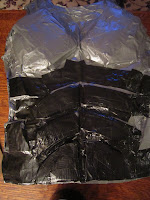 With all the structure in place, it was now time to cover the silver duct tape with black duct tape.  This took awhile, and was not particularly enjoyable.  When you add the layer of black over silver, you lose some of the definition.  This led to a need to re-accent most of the pieces with extra grocery bag. 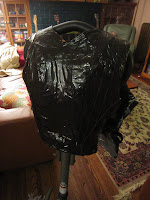 Amy was willing to cover the back of the chest plate with black duct tape for me (this pretty much requires a second person as you need to be wearing it to make sure it shapes correctly).  Had I used black duct tape in the first place this rather long extra step could have been avoided. 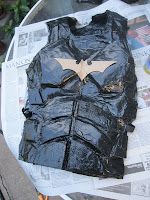 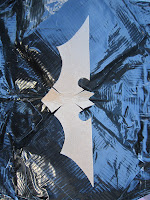 Finally all the duct taping was done, and it was time to add the final touches.  First was the bat across the chest.  I cut a bat out of cardboard, and then made a few slits in the neck and tail so that it could conform to the shape of the chest plate.  I taped the bat down using rolls of tape under each wing. 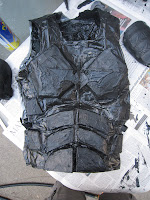 Lastly, I added a layer of Plasti Dip over the muscles of the chest plate.  Had I been able to wear the suit while doing this I would have had it completely covered in Plasti Dip, but Plasti Dip is very toxic while in its liquid state, so
>>DO NOT APPLY WHILE WEARING.<<
I brought the suit outside, and since I could not guarantee the suit was bent correctly, I only added Plasti Dip onto the muscles.  This way all of the flexible areas in-between remained flexible so that when I put the suit back on it will be the correct shape.  The Plasti Dip gives a nice semi-matte finish to the muscles (and bat) and also helps hold down the duct tape which will otherwise come off slightly over time.  In all the effect is very cool. 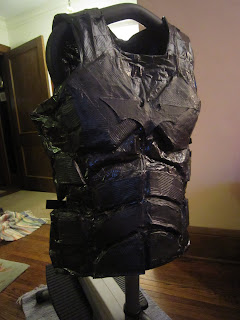 The next day the Plasti Dip was completely dried, and my chest plate was finished!