Here's the full costume . One of the trickiest things so far in this costume has been coming up with an idea for how to make leg armor.  After debating several different ideas for how to make pants that had the armor built into them, I finally decided on using Velcro and attaching armor plates to the outside of the costume.  The nice thing about this idea is that you can make as many pieces as you want, and try out different arrangements for the pieces. 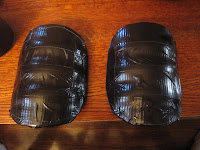 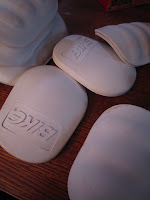 To start, I found used football pad inserts at a local used sporting goods store.  They were 50 cents each.  If you can't find them used, they are still pretty cheap new.  I covered these with duct tape and then coated the front with Plasti Dip. 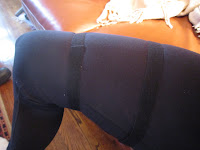 For pants, I am using an old pair of ski leggings.  I wrapped double sided Velcro around my leg in three places with the fuzzy side out and the hooks side in.  The Velcro sticks slightly to the leggings, which means the bands won't slip and I don't have to make them too tight, but it will also come off easily. 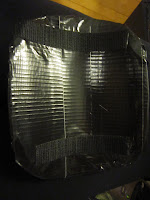 Then, using Velcro that is sticky on one side, I attached Velcro (hooks side out) to the insides of the pads.  I use two strips for each pad to make sure they will stay attached well and not flap around. 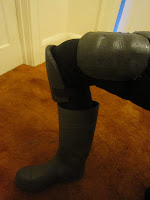 I tried using this technique for knee pads, but found it did not work well.  Instead, I bought cheap foam knee pads at Menards, and covered them in a layer of Plasti Dip.  They come with an elastic band, and I just wear them the way they are supposed to be worn (which is a first for this costume).  For boots I found a fairly cheap pair of black rubber gardening boots (steel toed for about $5 extra, just for kicks).