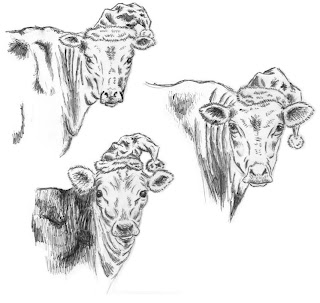 Some drawings I did for Christmas cards this year.  I very much enjoyed drawing them.
Posted by Chuck at 7:50 PM 1 comment:

I was recently in Florida with my camera, and here are some of my favorite photos from the trip.  I love the versatility of the camera; it works well for super close (best), medium distances, and is even ok for landscapes. 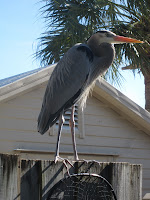 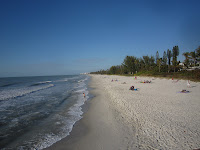 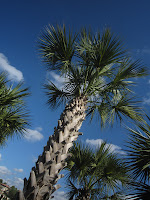 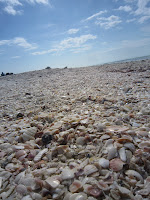 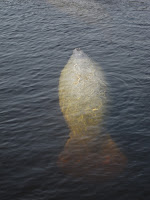 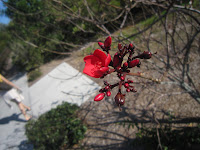 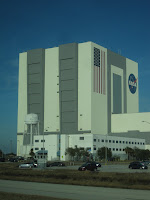 This last photo is for all you people who, back in 1969, doubted we ever really landed on Cape Canaveral (also it was taken out a moving bus window).

A few months ago I re-potted some of my phalaenopsis orchids which had finished blooming.  This was my first time, so I wanted to wait awhile to make sure it was successful, but the orchids are doing well (and budding and adding leaves and generally quite happy) so I'm confident that it went well.  Here's what I did: 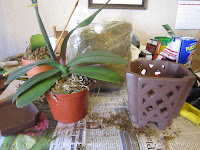 1) Buy a new pot.  I found some nice clay ones that are very well aerated.  Orchid pots need lots of holes so the orchids don't sit in standing water and rot.  Clay also helps take up moisture to further prevent this.  Your new pot should not be much larger than your old pot, as orchids like to be in fairly confined spaces. 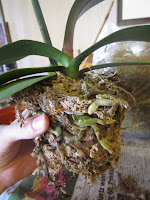 2) Remove the orchid from its old pot.  In my case, the orchids had a plastic pot inside the pot they were in, so I had to cut it off. 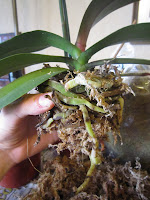 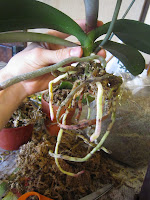 3)  Remove old moss/potting material.  The purpose of re-potting is not just to give the orchid a bigger space to live in, but also to remove old decaying potting material.  The potting material will be very tightly wrapped around the orchid, so be careful when pulling it out.  You may need to cut out sections at a time.  The roots of the orchids come in two varieties: roots growing under the potting material, and roots growing in the air.  Make sure you know which are which (the air roots are shiny), because when you re-pot the orchid you will need to keep them the way they were.  You may also find some dead/decaying roots.  These will be black.  These should be snipped off with the scissors to prevent them from rotting anything else. 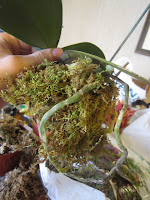 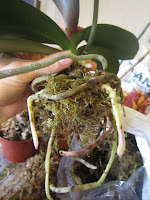 4)  Now that you have your orchid and its healthy root system, you need to start re-potting.  I used sphagnum moss because it looks good and I'm accustomed to watering orchids in sphagnum moss.  The trick to re-potting is to get a TON of moss around the orchid  (note: some people recommend soaking the moss before re-potting, but I did not do this).  First I took a large ball of moss and put it inside the space directly under the plant which the roots wrap around.  Fill this as much as possible.  Next, I put some moss at the bottom of my new pot.  I put the plant part-way into the pot, then continued packing in moss around the outside of the roots.  You shouldn't be able to easily lift the orchid out of the pot once you've added enough moss, so keep adding until it is well wedged in. 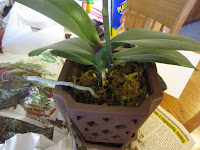 5) Finally, add some water.  You'll want to water lightly for the first watering or two after re-potting so the plants can adjust, then go back to regular watering after a few days.

My orchids have been doing quite well since I re-potted them.  They have new leaves, new roots, new spikes, and lots of new buds! 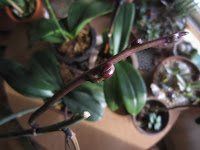 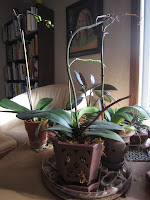 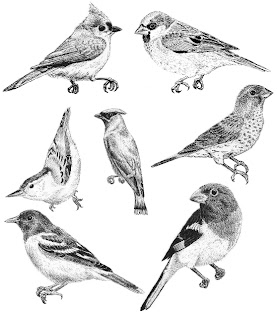 My latest drawings, another series of song birds (not to scale).

Still debating whether or not to try water-coloring them.

See all the Song Bird drawings
Posted by Chuck at 2:24 PM No comments:

I was never wholly satisfied with my first purple finch drawing, at the bottom of this post, because even though it was made to be water-colored, it seemed like it still was just too lacking in detail.  So I made a new finch, and the new one makes me much happier.  The new finch displays a lot more 'coloring' and patterns, even in black and white, so you have a better sense of what the bird looks like.  Here are both of them, see if you can spot the differences :)   Here are all the Song Bird drawings 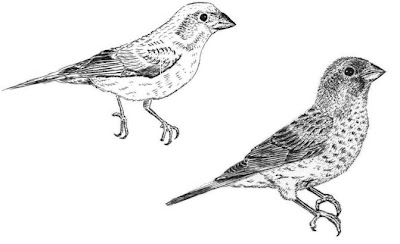 As always, these are the pens I use and love: 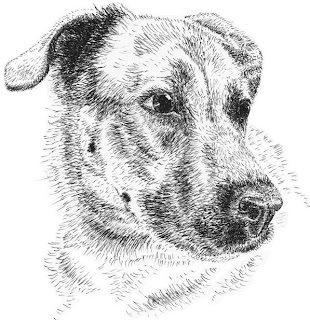 These are the awesome pens I use: