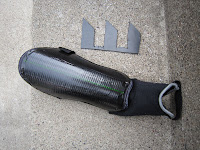 A batman costume of course needs batman gauntlets with spikes, but I didn't want to make something that might accidentally by a hazard to my health or those around me. 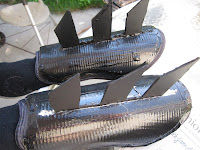 At the same time I didn't want to rely on cardboard or something like that, so I spent awhile looking around.  Eventually I was lucky and found an old cassette box that was made of a soft rubbery black plastic.  I cut the spikes with tin snips and made them one solid piece to keep them lined up. 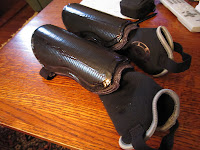 I found a cheap pair of kids shin-guards that fit around my arm, and colored in the fabric black and put black duct tape over the rest. 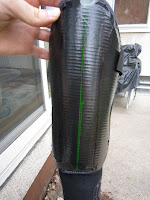 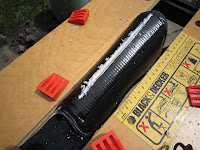 To cut a groove in the shin-guard for the spikes, I drew a line down the center with highlighter (something which actually shows up on black duct tape) and used a Dremel drill to cut into it. 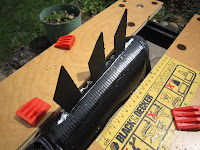 I put the spikes in, and sealed them in with Goop, which is amazingly strong. 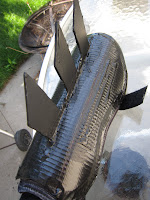 To finish it all off, I used the same liquid rubber (Plasti Dip) from the batarang to cover up the plastic that had been exposed in cutting and give it a consistent finish.

Finding gloves to wear over them proved tricky.  There are lots of good work gloves with padding that would look right, but I couldn't find any that are all black.  In the end I bought a black and red pair and just used permanent marker to make it all black (I tried fabric dye but the gloves are 100% unnatural so the dye didn't stay).
See all of the batman costume here