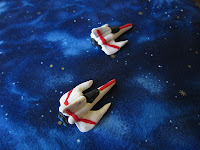 My latest Sculpey creations.  This time I tried to see what I could make of the Viper ships from Battlestar Galactica.  They are incredibly detailed and complicated ships, so I had to take some liberties in turning them into their geometric basics.

The main bodies of the ships are one long piece (White), with everything else added on top.  Three small white cylinders sit on top of the hull (Yellow). The wings sit underneath them, and the dorsal fin is on top (Green).  The cockpit was added on after the rest of the body of the ship was together (Black box).  The engines are a black diamond (Black diamond), then small black circles (Gray), then smaller blue circles (Blue).  The red stripes were rolled fairly thin, then simply pressed down onto the clay. 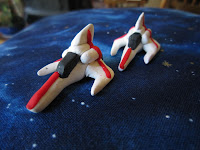 The final products are about an inch long.  I wish I had poked holes in the wings because they would make a fun hanging diorama.  Maybe next time. 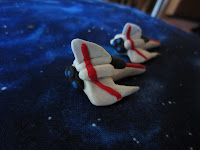