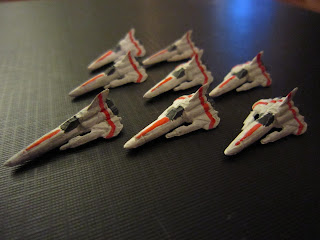 A friend of mine got a copy of Battlestar Galactica the Board Game this past winter.  The game is a ton of fun to play, especially if you are a BSG nerd, and includes numerous small plastic ships that are used.  As a present, I decided to paint my friends' ships.  Most of the ships in the show are already dark grays of varying degrees (the color plastic the ships came in anyways), so I decided not to paint all of them.  Rather, I focused on the Vipers (white ships) and the red lights that come out of the cylon Raiders. 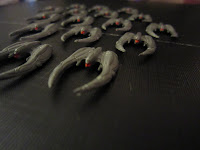 The Cylon Raiders were pretty simple.  I only painted the red line on the front of the ship, and just used a toothpick to do the painting since the area was too small for any of the brushes I had on hand.  I made a base layer of white first, then applied red over the top.  This helped the red be a bit stronger since it was being painted onto almost black plastic. 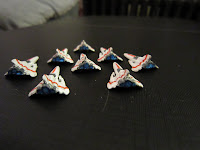 The Vipers were a bit more complicated.  I first painted on numerous thin layers of white until the gray plastic beneath was completely gone.  Then I painted a dark gray onto the engines and cockpit canopies.  Next I made the red lines down the wings and center of the ship.  This was touched up with more white wherever the paint strayed.  The backs of the engines, where exhaust would come from, I painted dark blue.  I then did a thin wash of gray, letting it seep into the nooks and crannies of the models.  This is the cheap and dirty version of starting with a dark base coat and working up lighter and lighter, but this way the ships had a dirtier, worn look, which I felt was appropriate.  It also meant the worn look covered the red highlights as well as the bodies of the ships.  The engine exhaust was then finished by making progressively smaller interior circles of lighter blue paint, until the very center of each one got a tiny dot of white.  Apologies for not having pictures of the various stages along the way.