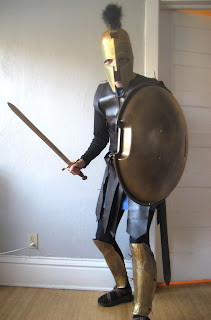 So I knew I needed some sort of chest armor for my hoplite costume, but had no idea where even to begin.  Then I saw one of Russel Crowe's costumes in Gladiator where he is wearing a leather chest plate that is made by multiple leather straps rather than one continuous piece.  This seemed plausible to make, as I have no idea how to forge an actual bronze chest plate or even a solid piece fake leather one.  So with that inspiration, I set to work.

I made this as easily as possible because I really can't sew.  The only things I did to make this was cutting the fabric and tying a few laces in knots.  It's that simple.  The design is a little complicated, but hopefully I will describe it adequately here for you! There are many diagrams I made which should make it easier. 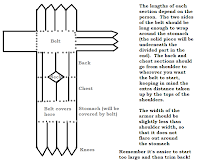 I started with 2 1/2 yards of a faux-leather halloween costume fabric (standard fabric roll wide, about 3 feet I think?).  The entire costume is made by cutting away at this.  There are two things to think about when starting out, which are how long the costume needs to be (knees to shoulders, over shoulders, and back down to knees) and how wide (the main body of the armor is as wide as your stomach/chest, the 'belt' goes around your back once and layers twice over your stomach).  That said, I made my basic 't' shaped design.  The main body of the armor is the long part, and the belt is the extensions out left and right on what will be the back side.  The ends (front and back) of the armor will eventually be free-hanging straps.  I measured my chest (measure to the base of your shoulder, not the ends of your shoulders) to determine how wide I needed to keep the fabric, and then my waist to see how long each side of the belt should stick out, then I started cutting.
Once I had my 't' shape, I made the central slit down the middle (where my head will go) so I could put the costume on and see how my measurements added up.  I determined one thing right away: do not measure out your full shoulders.  This ended up giving me a giant costume that had huge flaps around the stomach.  Rather, the chest piece needs to be as wide as your stomach/chest without shoulders so that it stays closer to your body.  I trimmed the armor accordingly and also shortened my belt pieces to the correct lengths, then continued on.

The armor is made up of 4 long straps that go front to back, and I wanted to re-create that but without actually using 4 individual pieces of fabric, so I cut from the shoulders down (front and back) to make the four straps, but did NOT continue them through the belt region,  This gave me the look of having 4 straps and the belt will later cover the part where I did not cut.  Keeping the entire piece solid like this means much less hassle later on and fewer knots to tie.

Now with 4 straps, I tried on the suit.  Unfortunately, having no specific head hole means that when I put the armor on, it all bends outwards.  To remedy this, I cut a diamond shape where my head needed to go (a triangle cut into both of the middle straps).  This worked much better.  To finish the chest/back, I added faux leather laces to tie together the straps.  I simply cut short slices into each strap adjacent to each other and used the lace to tie them together.  I made these ties on top of each shoulder and one in the center near my sternum.  I also made one long continuous strap that united the front and back pieces.  I made cuts in all 8 (4 front and back) straps and ran one long lace around the entire suit.  This lace goes UNDER my arms, and keeps the belly region together. 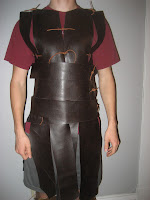 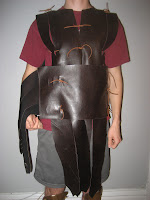 Now done with the top of the armor, I moved onto the belt.  The belt is fairly simple: The two flaps coming off the back of the armor are wrapped around to the front and tied down (using the same technique as the shoulder ties, just make two slits in the belt piece and also the piece you are tying it into and run the lace through).  Once you've tied down the first belt piece in front, bring the second belt piece from the back have it overlap the first, then tie it down as well.  I made the second belt piece into 3 straps by cutting it long-wise (and made one tie for each strap) and also made each end into a triangle.  I thought it looked neater.  The photos show the first belt tied in (left) and the second belt tied in (right).

Finally, with chest and belt finished, it was time to finish the bottom pieces.  I didn't do a lot for these, just cut them into 4 straps (mirroring the chest piece) and made each end in a triangle.
All done!

For all the Hoplite Costume articles click here!
Posted by Chuck at 6:18 AM