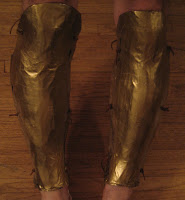 I wanted to make better greaves (shin-guards, more or less) this year, and I decided to try out Paper Mache.  I haven't tried this much before, so I thought it would be interesting to see what the medium can handle.  I used a very simple recipe for the paper mache: half glue (white) and half warm water.  The final result isn't too bad.  The two greaves aren't very symmetrical (probably could improve on that if I did it over again), but they are surprisingly strong and I believe will hold up well.  Here's how I did it: 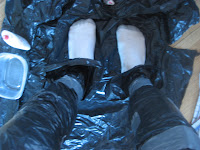 First, I wrapped my legs in plastic garbage bags so I would have something to build the paper mache off of.  Hoplite greaves should be custom-fit, so this way I would make them as accurate as possible. 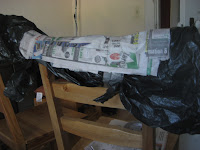 I mixed my paper mache (half warm water, half white glue), mixed it well, and cut up newspapers into inch-wide strips.  I dipped the newspaper in the glue mix, used my fingers to wipe off excess liquid, and started laying the newspaper onto my shins.  I paper mache'd from my ankles to the tops of my knees, and around the sides of my calves.  I made the paper mache about 4 layers thick.  Once I had my 4 layers, I waited about half an hour so the paper mache could dry enough to stay in the shape of my leg.  Then I cut the garbage bags at the back of my leg and removed the greaves.  I let them dry completely overnight by putting them over the backs of chairs.

The next day I reinforced the greaves by putting a layer of duct tape over most of the greaves (but not the entire surface; I wanted to make sure the next layer of paper mache could fuse to the previous layer).  Then I added another 4-layer round of paper mache. I repeated this a few more times, before I was finally satisfied with how thick and solid the greaves were.  I then cut off the excess garbage bags and trimmed the greaves into the proper shape.  It turned out I had made one of them too short, so I used duct tape to build a top (knee cap) and then put one final layer of paper mache over that (and also around the edges where I had cut the greaves out). 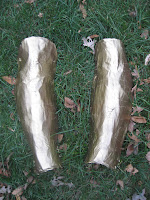 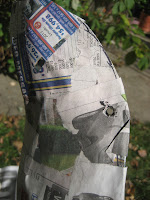 I made the straps out of fake leather laces, and tied double knots one one side so they wouldn't slide through the holes I had made. 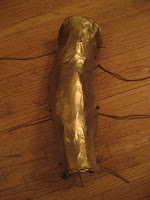 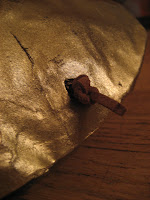 Finally the greaves were finished! They aren't perfectly smooth, or shaped, but they are decently strong and were super cheap and easy to make.  It was also nice to experiment with a new medium and see how strong paper mache can be made to be if you layer it enough.

See all the Spartan Hoplite Costume articles here!
Posted by Chuck at 8:04 PM