**scroll to bottom for the nine years later update!**

See the plants I used here.


The past week I have been embarking on a quest to make-over the hill in my front yard.  This was recently dug up for a pipe-replacement project, so I decided now was as good a time as ever to re-do the whole thing since the sod was already removed for me.  Had I been more thoughtful, I certainly would have planned out what I was doing, but as it was I did enjoy just winging it and seeing what I could make.  My basic idea was to cover the hillside in rocks and shade plants (it is a north facing hill under a tree).  To this end, I went to a local landscape store for rocks and plant store for plants on sale (this late in the season it's not hard to find really good deals).  The rocks I ended up buying in three loads of roughly 300lbs, for a total of half a ton of rocks (which, as I found out, is only $45 if you buy it at the right place).  The plants were much more expensive in the end (a couple hundred) but thanks to late season shopping I also managed to save a couple hundred dollars, so I felt it was worthwhile.  Here is a rundown of what I did, with the important things I learned in bold.

1) To start, I placed the first load of rocks into the hillside and began making a slightly falling pattern across the hill.  This was then accented with the first of the plants I bought.  Two lessons from this section: Place like-plants together to make denser groupings.  These purple and pink flowers look nice, but they are much more noticeable when they are in groups.   Other lesson: Dig rocks into the hillside.  Don't just set them on the ground; it does not look as good and they are liable to roll down the hill.  The strange diagram here shows the basic idea: 1) Find a slope. 2) Dig into the slope horizontally and vertically.  It is important here to make the horizontal plane parallel to the ground or even sloping back into the hill if you have smaller rocks. 3) Put in a big rock.  The taller the rock is, the larger a space you will level out (but make sure the rock is heavy enough to hold the dirt you will put in behind it) 4) Fill in the area behind the rock with dirt. 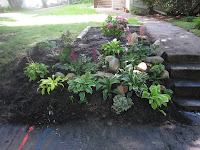 2) Next I made my largest single plant purchase when a local store had a 50% off sale, and had to incorporate these plants into what was still a mostly barren hill.  Without the rocks to set the levels and paths through the hillside, I had to guess at how far apart to place the plants.  Lesson of the day: Make your underlying structure out of rocks before planting.  This would have saved me a lot of moving plants around later, and allowed for more complicated leveling of the ground.

3) Next, I had to fill the second car-load of rocks into the hill side, around the plants already in place.  This gives you limited options, which ended up meaning I had to throw out my initial idea of a waterfall-like effect going across the hill side.  Instead, I focused on making groups of rocks that would help level patches of the hill where the plants already were in place.  I now had 700lbs of rocks in the dirt, so at this point there was no turning back to make major renovations without a lot of effort.  I also realized at this point that I needed much more ground cover to fill the larger gaps along the sides and bottom of the project.  Lesson: Get plenty of ground cover; it will take time to grow. 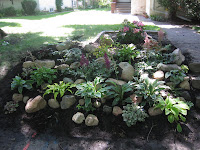 4) At last I came to my last batch of rocks.  By this time, I realized my entire project was too haphazard and needed to be unified more.  While it is possible to make a rocky hill side without uniting the different elements, the way I had been going about it was not going to work out that way.  What I needed was to connect the different groups of rocks and divide the hill into three major levels, with small variations within each one.  This wasn't too difficult, as most of my planting had been roughly in rows to begin with.  Had I thought ahead and put the rocks in before planting at all, I could have made these three layers interact more (such as having a path that sloped downwards and connected them), but alas I did not.  Lesson of the day: Make each layer continuous across the entire hill to make structure. 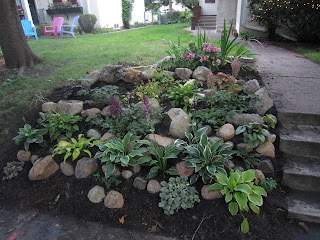 5) Having finished the last step, I thought I was done.  This is when I realized I had no back to my project; it simply wandered into the grass yard.  I decided to gather the rocks on the top level and actually combine them into a solid wall defining the back edge of the hill-side landscaping.  This gave a much more satisfying look to the project, as it now appeared complete and defined.  I also added some Iris' from my back yard in order to get some height at the top of the hill.  Lesson: Outline your project in some fashion to separate it from the rest of your yard. 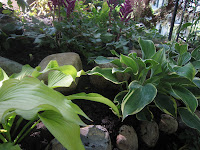 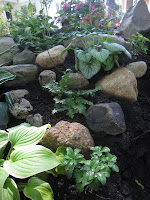 So now some of the finer points of the project.  Using rocks for leveling helps turn a single slope in a hill into a multi-layered piece of terrain.  These multiple layers and added depth can then be used to showcase different types (and sizes) of plants.  If you have a particularly tall layer, you can plant taller plants, and likewise shorter layers will look better with shorter plants.  Ground cover or climbing plants can help unite the layers.

Using rocks to make levels also helps the plants themselves.  The rocks help prevent erosion, which means the plants have a more stable environment to grow in.  Show here is an example of a hosta I planted one day, and after watering noticed that the roots had been exposed.  I dug into the dirt to make a place for the rock, then piled dirt behind the rock.  Voila, the roots were back underground.
The rocks also help separate the plants.  Right now, with everything freshly planted, the rocks are very apparent.  In coming years, as the plants grow larger, the rocks will be less visible.  They will, however, keep the plants from growing into each other and will help ensure that one particularly well growing plant does not overwhelm the others.  Because the rocks are in place, I felt comfortable planting much closer together than I normally would have.

On the other side of the steps there were already a few hostas planted, so I had to landscape around them.  This was very simple.  First I removed what little grass was around (including above the plants).  Next, I dug into the hill to create spaces for rocks to make walls for leveling.  I put in the rocks, and after some minor adjustments was finished! 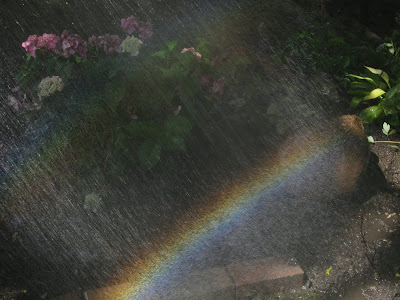 Finally, a double rainbow while watering.

Almost all of the original plants are still alive (except the brunnera macrophylla).  Just this year I finally made a new rock addition at the base of the hill along the sidewalk to prevent mulch from cascading down.  The Hosta have taken up most of the space, though partly because I keep forgetting to divide them.  I've moved a couple of the plants, and a few of the rocks that weren't buried deep enough fell and had to be re-dug, but for the most part I've not had to do much upkeep on the garden.  The 'shade' part of the shade garden comes from a maple tree, so I do spend some time each year pulling out tiny maple saplings.  I expanded the garden across the rest of the hill and now am slowly working it back down the yard towards the sunnier areas, so the shady hill garden may soon become the shady hill garden attached to the sunny meadow garden.  Happy planting! 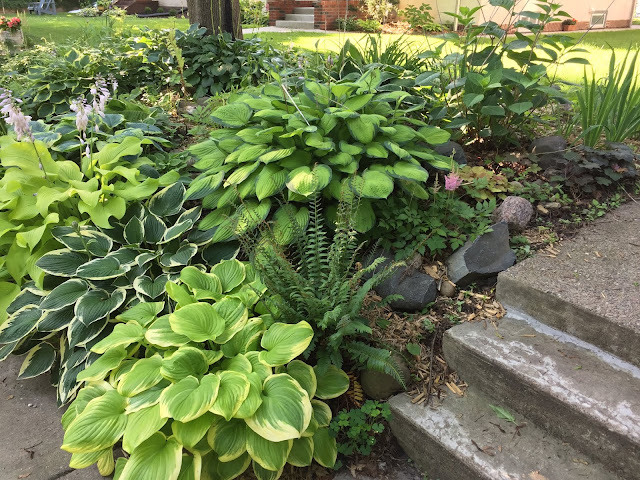