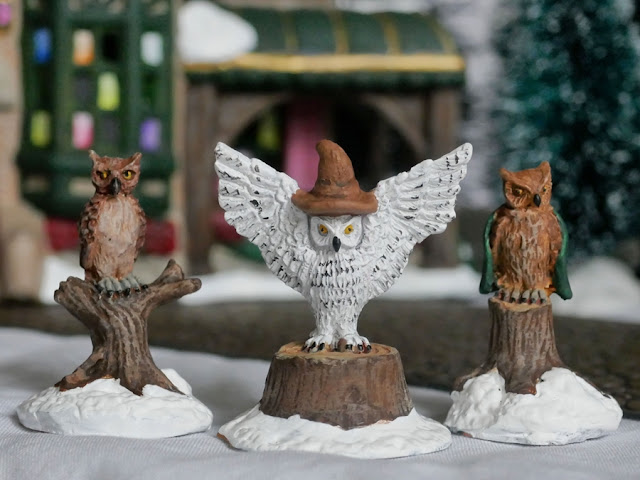 As the first addition to the Hogsmeade Christmas Village, I converted some Halloween Owls I got on sale into wintry Harry Potter owls.  It was actually a bit easier than expected; I used a dremel drill to remove the 'Halloween' aspects of the models, then simple acrylic craft paints to repaint them.

The owls I got were in a pack for a Halloween village.  I had no idea what they were made of, but given their price point I assumed that they could contain lead.  As a result, I made sure to take some extra precautions when using the dremel drill to remove the halloween flare. 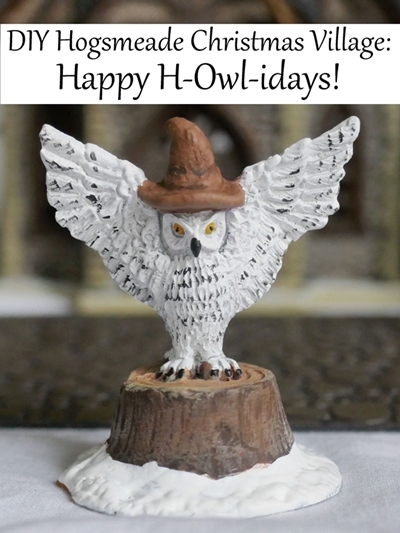 The owls, as seen above, had a few items that needed to be removed in order to convert them to Wintry Wonder.  I dremeled off the spiders, rats, halloween mask, and the high collar of the dracula cape.  I didn't dare remove the entire witch hat or cape, as it would have required sculpting a large piece of the owl. I used light strokes with the drill to make new 'feather' imprints below the areas where I removed things.
Painting:  I started the painting with a base layer of white.  It took a few layers for the Hedwig owl in order to get a solid white color.  Be sure not to put the paint on too heavily as you don't want to obscure any of the detail. 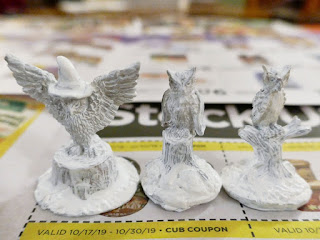 Next I started adding color.  The non-caped owl I gave darker brown wings/head/back with a lighter belly.  The caped owl I painted a more orangish color for variety (the cape I painted green).  The hat owl I left white, to make a snowy owl a la Hedwig.  The tree trunks I painted a dark brown, with a lighter brown for the cut surfaces. 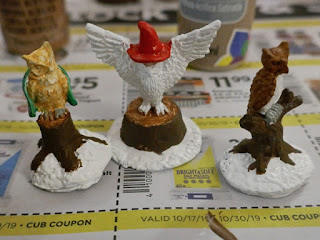 From here I began doing layers of dry brushing and washes.

Washing is taking a darker color paint and diluting it with water.  Take this and paint your item, allowing the watery paint to seep down into the crevices of the item.  This will help accent shadows.  Generally I use black paint for washes, but occasionally other dark colors if it will fit in better.

(For the eyes, I did golden yellow, then very tiny black dots on top for pupils.  It was surprisingly difficult to get the pupils to face the same direction!)

Dry brushing is when you use a lighter color paint, put a small bit on a brush, then remove most of it on a piece of newspaper or paper towel.  Then very lightly paint with the brush so that only the top bits of the surface (the highlights) receive paint.  Typically I do a wash first, then a dry brush once it has dried.  If you do a wash over a dry brush it will darken the highlights a bit.

For Hedwig, I needed to convert the witch hat into either something Christmasy or Harry Potter-y.  I decided to paint her wearing the Sorting Hat.  The hat was light brown, and I added eyes and a mouth with a darker brown paint.  I then did a dark brown wash to give it better depth and texture.