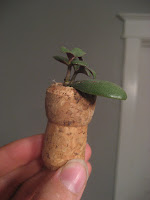 This fall I found myself with quite an abundance of tiny jade plants thanks to my experiments this summer learning how easy it is to propagate jade plants.  Fortunately, The Culinary Capers had a suggestion on what I should do: Make tiny cork succulent gardens.  There are a number of websites describing this out there, but it is an extremely simple idea:  Take a cork, drill or dig a hole in it, plant a tiny succulent in it (don't forget to water it!).  There are a million things you can do with such a tiny garden; put a magnet on it and slap in on the fridge, put a suction cup on it and stick it on the window, put a pin on it and attach it to your hat, the possibilities are endless.

I don't predict these to have very long life spans (the fingernail full of dirt that they are in will be used up pretty quick) but they are adorable.  I used a chopstick to help push the dirt and roots into the hole.

Update: Two months later it appears to still be alive! At the very least this could be an amusing way to transport tiny jade plants. 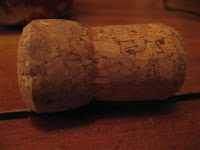 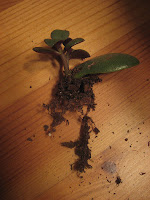 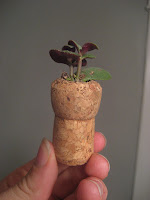 Update: June and it's still alive (over seven months later!).  I'm planting it back into a regular pot to see if it is still viable.