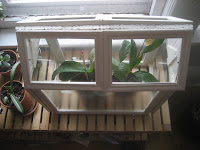 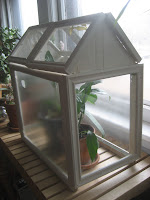 I saw this project awhile ago and really wanted to make one myself.  The basic idea is to make an enclosed glass terrarium using old picture frames with the backs removed.  You screw the frames together, add a few hinges and paint, and voila!  I ended up using the countryliving.com directions, rather than the original, so mine has a hinged top.  I also didn't have any access to plywood (or even a saw...) so I used thick cardboard to make the triangular wall tops (we'll see if they rot or not). There is no bottom to either the countryliving or the blogspot versions, so they aren't air-tight, but still hopefully keep in some humidity. 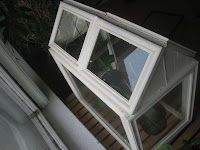 This is where the project comes from and complete directions.  theupcycler.com is the original, countryliving.com is the fancier version that they then published.


The hinged-top version (countryliving) has the benefit of being easy to use (you can put plants into it rather than having to pick up the entire box and set it over the plants) but you lose more humidity.  I use mine mostly for decoration, and also as a handy way to keep the cat from eating plants.  Currently I am giving it a trial run with an orchid and a peace lily plant to see whether it keeps enough extra humidity around to help them grow.  Here are some pictures of construction and the final project. 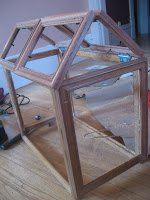 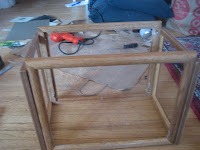 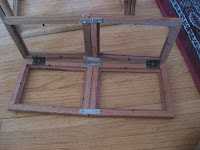 I first foolishly tried to put the screws into the frames by hand.  This led to splintering the frames beyond recognition, so I changed to a drill and life was much easier. 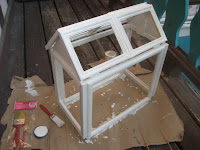 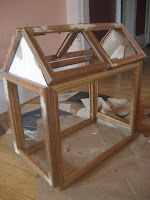 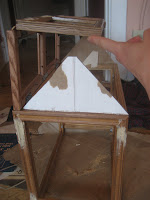 The four frames making up the top of the case did not sit very flush, so I used Popsicle sticks, wood putty, and hot glue to seal it up a bit.  In the end though, it was a hefty coat of paint that covered most of the little gaps. 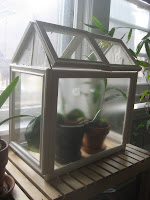 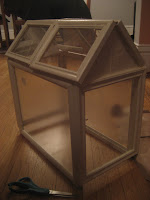 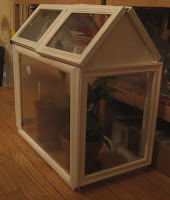 I put the glass back into the frames after the paint dried, and used a bit more hot glue to make sure they stayed in place. 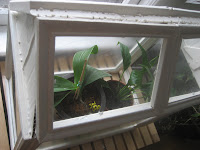 The little poison dart frog is from an earlier project you can see here.
Posted by Chuck at 7:09 PM