How to Divide Hosta

Another post that is already more than covered by the rest of the internet.  Dividing Hosta is really easy, as Hosta are incredibly resilient and hardy plants.  If you're ok with them not looking amazing for the summer, you can divide them pretty much whenever you want, and the next year they will be swell (if you want them to look nice, divide them while the shoots are still coming up in the spring, or in early autumn when most plants are done looking nice anyways).  You can divide them either by digging out the entire plant and then cutting it (good if you're planning on making more than one division in a single plant), or by just chopping the plant in half with a shovel while it's in the ground and only digging out the part you want to remove/transplant.

To help extend the life of plants out of the ground, you can leave them in the shade, keep lots of dirt around the roots, and/or moisten the roots with a hose.  The more roots you have in each division, the faster they will rebound after transplanting.

Dig out method:
1) Dig plant out of ground (you want to preserve lots of roots so that each of the divisions gets plenty of roots, so be sure to dig a nice deep hole when digging out the plant) 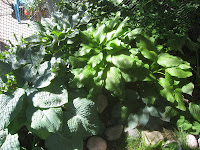 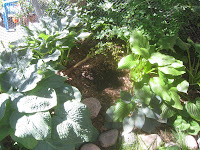 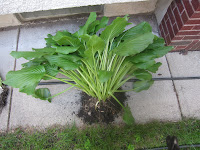 2) Separate leaves and find a natural separation line where you can chop the plant in half without breaking all the leaves (it's fine if you break some leaves, but you don't want to have a root ball bereft of foliage).
3) Chop! I just use my big garden shovel and push it with my foot, like I'm digging a hole. 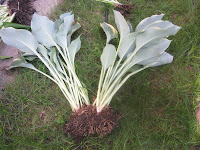 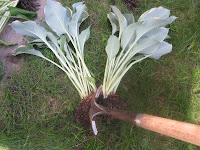 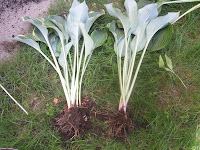 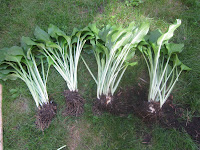 4) If you have a very large hosta, you may wish to further divide the two halves.  Make sure each division contains part of the primary root ball.
5) Replant and water! Don't let the divisions sit out of the ground for very long because they dry out (though, again, they are hosta and will probably survive anyways).

Chopping in the ground method:
1)Identify a natural division between leaves so you can chop the plant in half without destroying all the leaves.
2)Chop! Use a big shovel, place it along where you want to divide the plant, and kick it into the ground!
3) Dig out the half you want to remove or transplant.  Make sure to replant it in a timely manner. 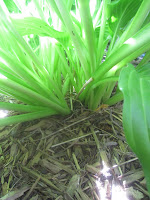 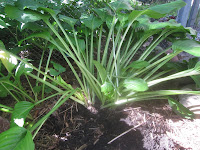 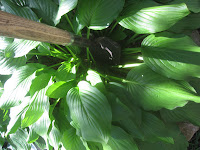 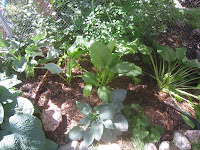 Addendum: This spring I had a chance to divide one of my hosta in a more timely manner using the 'divide while the shoots are still coming up' method.  It is still very simple, and actually a little easier than after the leaves open because there is less stuff in the way.  This was a hosta that should have been divided last summer but it is one of my nicer plants and I didn't want to damage the pretty leaves once they had unfurled.  So this spring I got to it early, chopped it in half with the shovel, and moved part of it to a new location!   You can see from how long the roots are that I actually could have dug out a bigger hole, but there were other plants I wanted to leave intact.  It really is just as simple though as dividing the patch of shoots with your shovel, chopping down, and digging out! 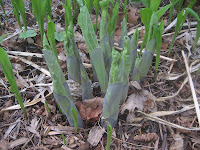 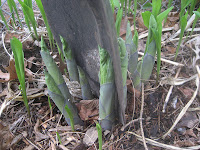 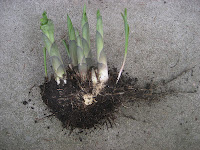 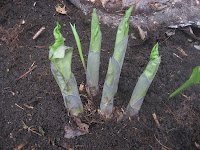