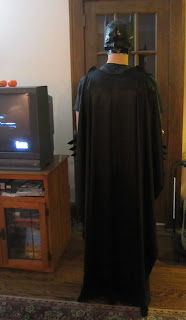 (Note: For the rest of the costume, go here, you will need to click 'older posts' once you've seen all the costume posts on the first page)

So finally I needed a cape for the costume.  Fortunately, Amy, who knows sewing, pretty much made it for me.

First we bought the fabric.  We used a black crepe backed satin, which is a nice solid shiny black, and also a good weight for a cape (heavy enough to fall nicely, light enough to move around). 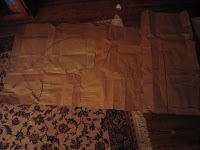 Next we made the pattern.  To do this, we taped together numerous paper grocery bags, and then drew one side of the cape onto it.  We only drew half of the pattern because we wanted to fold the cape over to cut it out (so the sides would be identical).  We made a basic bell shape, but added a neck hole so that the cape would naturally sit on either side of my neck and not rub against my neck.  We found out shortly that we should have made the bottom turn up on either side rather than be flat (more on this later).  The length of the cape is the distance from the top of my shoulder to about half an inch off the ground (with hemming and wearing boots this should give me a final distance off the ground of a couple inches).  The width of the cape at its widest is the full distance around my chest. 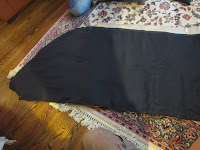 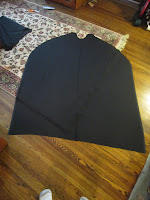 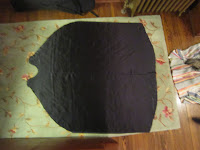 Once the fabric was cut, we realized that the way we had made the cape form ended up with the sides of the cape dragging on the floor (Left Photo).  To remedy this, we curved the bottom of the cape, bringing the edges up quite a few inches (Right Photo).  This way the cape now falls flat around the feet.   Because of how the cape falls from the shoulder, the edges of the cape need to actually be shorter than the middle, so that when it is on your shoulders it all falls evenly above the ground

Once the shape was done, Amy (very kindly) hemmed the entire cape about half an inch.  This gives it a much nicer edge, but can be skipped if you are in a hurry. 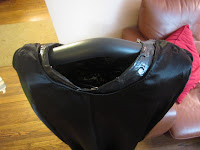 Finally, we sewed snaps onto the cape.  The corresponding halves of the snaps were Gooped onto the chest plate (allow a full day to dry).  This works very nicely, and allows the cape to snap onto the costume without tugging on your neck!  The duct-tape chest plate has proven more than strong enough to hold up the cape.

For the rest of the costume go here