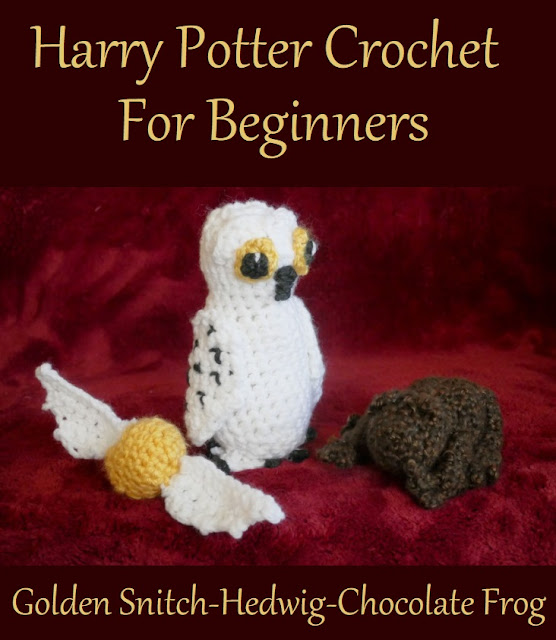 I've been debating trying out crocheting for awhile and a few weeks ago had a chance to finally start.  This post will walk through the steps I took to learn the basics of crocheting and then make all three of the toys shown above.

Supplies:  I used an USH8/5mm hook and worsted weight thread (if you haven't bought thread before, basic thread at a craft store often says what size crochet hook to use on the label).  I also in the end used a darning needle (like a sewing needle but blunt for knitting and crocheting) and a stitch marker.  I stuffed the toys with cotton stuffing, but there are many options available.  I used a Yellow/Gold and White thread for the Golden Snitch, a brown thread for the Chocolate Frog, and White, Black, and Yellow/Gold thread for Hedwig.

My first stop was this Youtube video:
https://www.youtube.com/watch?v=aAxGTnVNJiE
This video shows you how to do a basic stitch and how to weave in yarn ends, which is 99% of all I did to make these! I also did the follow-up tutorial, but I didn't end up using any of those fancier stitches in these projects.

Next I moved onto my first project, the Golden Snitch.  I used this video for the ball: https://www.youtube.com/watch?v=aAxGTnVNJiE
This video shows you one way to make a Magic Circle which I used for Hedwig a few times.  I made a total of three balls for practice.  I didn't actually end up using the wings shown in the video, instead I made my own pattern by chaining 12, crocheting back down the line, and just going back and forth a few times, slowly decreasing the number of stitches on the far end.  The video does show how to connect the wing to the ball by sewing in the thread using the darning needle (also very useful for Hedwig as it is made of many parts). 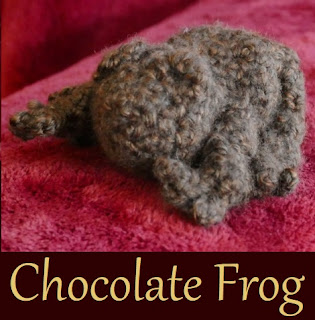 Once I had a nice Golden Snitch I moved on to the Chocolate Frog.  I used this video:
https://www.youtube.com/watch?v=ltWGQwgUuZU&t=12s
This video shows you how to slip stitch, which is another technique I used for Hedwig.  To make the frog chocolate I used a brown thread and skipped the plastic eyes but otherwise followed this tutorial.  This was significantly harder than the Golden Snitch, but again good practice for crocheting.

Once I had my Golden Snitch and Chocolate Frog in hand I set out to find a good snowy owl or Hedwig pattern.  Unfortunately I couldn't find one that was quite what I pictured in my head, so I decided to make one myself!  The directions are below  Apologies to real crochet-ers who know how to read crochet patterns; I do not know how to write them! 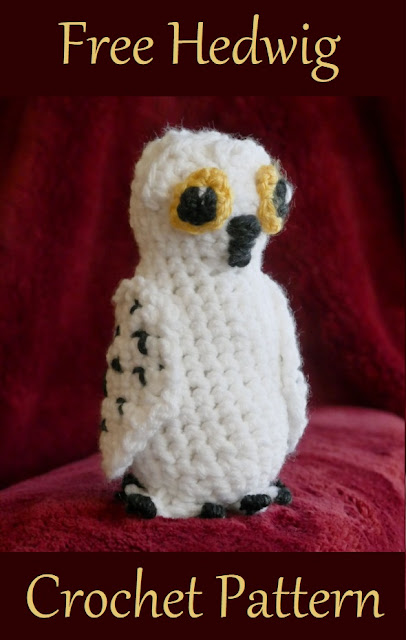 Owl Body - I used white worsted weight yarn. The pattern starts at the bottom of the owl and works upward. I use the stitch marker to keep my place so I don’t go more than a full circle (if you are very good at counting and paying attention you don’t have to have one, but I’d recommend it if you are easily distracted like me). 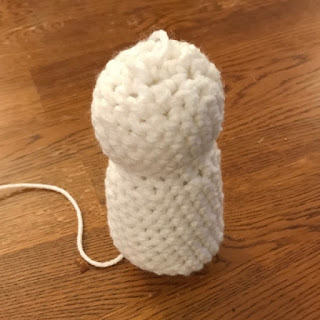 Single crochet 2, Increase around (total 24) (it should be a pretty flat circle still)

Single crochet around (24 still). The form should start to bend up

Single crochet 2, Decrease around (down to 18) (starting the neck)

Single crochet 4, Decrease around (down to 15)

Single crochet 4, Increase around (up to 18)

Single crochet 2, Increase around (up to 24)

Single crochet around 3 times to build up the head

Single crochet 2, Decrease around (down to 18)

Single crochet, Decrease around (down to 12)

**add stuffing at this point**

Single crochet 2, Decrease around (down to 9)

Single crochet, Decrease around (down to 6)

turn and single crochet back down the line (5)

single crochet 4, then Increase the last one (6)

single crochet down the line (6)

single crochet 5, then Increase the last one (7)

single crochet down the line (7)

single crochet down the line (8)

single crochet 6, then Increase the last one (8)

single crochet 7, then keep stitching over the right angle bumps until you get back to the original starting line (see image).

Loop one and break off thread. Leave a long end so you can sew the wing to the body. Do NOT sew the wings on until you have added the black markings! 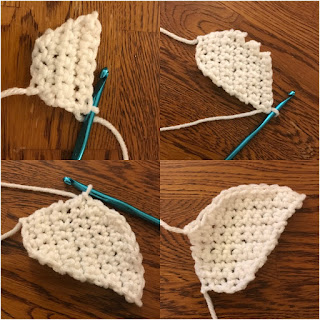 Once you have your markings finished, use the darning needle to sew the wings onto the body. Depending on your preference you can sew along the full edges of the wings (to keep them close to the body) or just the front edges if you want them to be able to flap a bit, or somewhere in between! I use the term ‘sew’ loosely; I just run the needle back and forth between the wing and body with reckless abandon, there is probably a more correct way but I’m very much a beginner! 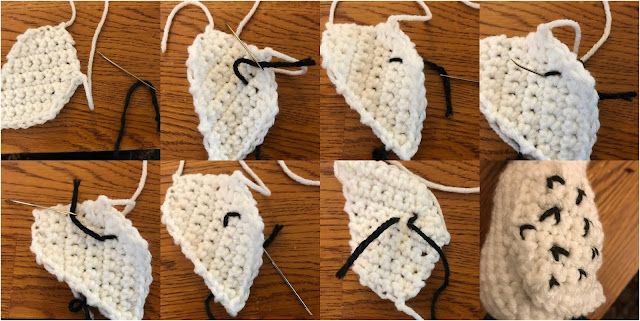 Chain one and break off a long thread


Talons: Use black thread on a needle, tie a knot around the end stitch on each toe and then pass the thread through over and over (covering the knot) until you have a nice talon, then tie the end of the thread to the thread from the knot (at the BOTTOM of the toe so it's hidden)

Use the darning needle to sew the feet to the body.

Eyes (make 2): The eyes are a black center with a yellow/gold rim and a single white line for a ‘reflection.’

Magic circle 4 with black thread. With yellow/gold yarn do a single crochet then chain 1 around the circle (you can either tie off the black thread and then start again with yellow/gold or just link the thread together if you know how to do that). Chain one and break off thread once you've gone all the way around.
Use a piece of white thread on a needle to make a short loop and tie at knot behind the eye to make the 'reflection' in the eye (see picture). I left very long threads for both the black and yellow because sewing the threads back in can help hide mistakes. I used the yellow thread to actually attach to the head.
Use the darning needle to attach the eyes to the body. Note that you are using yellow/gold thread to attach so it will show up if you sew away from the eye.

Eyebrows: These are sort of unnecessary but I felt like trying to make them. Snowy owls have pretty smooth dome heads so feel free to skip this if you like how your owl already looks without them!

I used the *very* long thread I had left from the top of the head and used a darning needle to stick it back down and out next to the left eye. I then crocheted 5 from the side of the eye to not quite the center of the forehead (you don't want the two eyebrows to touch). Hook one, turn, and stitch 5 back down the line so you have an eyebrow that is 5 crochets long and 2 crochets tall. Thread the darning needle and move over to the other side and repeat. Once finished hook one and break off a very long thread. I used the thread to then sew the eyebrows back so they turned into smaller ridges above the eyes, but if you like the more stronger brow-ridge look then leave it at that!

Beak: Thread black onto a darning needle. Thread across the stitches between the eyes and tie a knot. Loop through over and over to cover the knot; let the strand from the knot fall down the face, and loop over this as you make your way down the beak. Progressively make smaller and smaller loops, and then tie the end to the knot thread. Use your darning needle to bury the end of this new knot thread back up and under the beak. 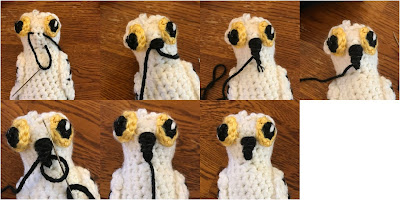 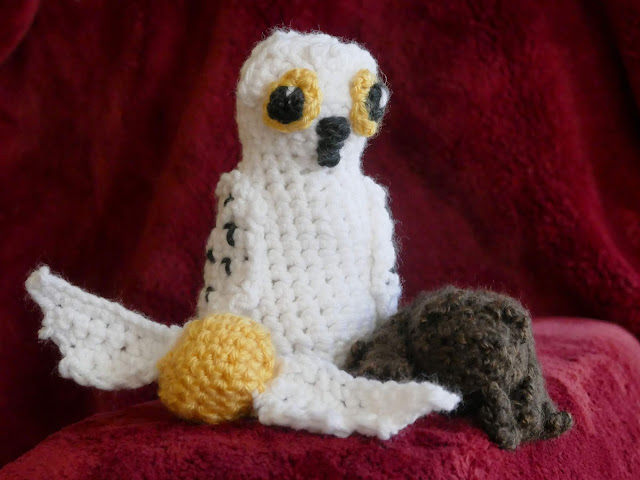