For Halloween this year I made an articulated Ceratosaurus leg. The final product is about 40 inches tall.  It was pretty cheap to make, and most of the supplies I had at home already except for the PVC pipe and insulation.

I used photos I found online to determine how the leg should look, but I highly recommend you go to your nearest Science Museum and take 360 degree photos of a dinosaur leg for best results!

I started by cutting up a PVC pipe into lengths that more or less mirrored the bone structure I wanted to make. I made the leg based on random pictures I found online, so it was all just guessing.  The leg starts as  a single big bone (femur), then splits to two bones (tibia and fibula), then three bones (plus a bonus bone)(metatarsals), and each of those last bones have toes off the ends.  I used 3/4 inch PVC for the first three bones, then 1/2 inch PVC for the metatarsals/toes.  I ran a single piece of rope all the way through the pipes so that the bones would all be connected (later I tied the rope off where it exited the last toe.  The fibula was tied to the tibia with an extra loop of rope.

Here I covered the top bone (femur) in insulation foam to give it extra bulk, and started forming the end of the bone by adding aluminum foil.

Since the rope that connected all the bones only ran through one toe, I used wire to make a frame for the rest of the toes to sit in.  The wire was bent at the end of each toe (or aluminum foil added) to prevent them from slipping off.

Here is the partially complete leg, with just the foot to be finished.  Besides the insulation foam on the femur, the rest of the additions are just aluminum foil with a little duct tape here and there to keep it in place. 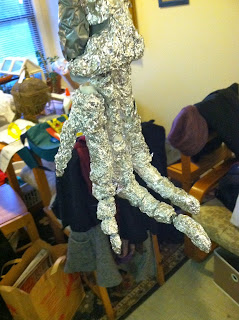 Once I added aluminum foil to the foot I realized that some of the dinosaurs I was looking at had a 4th toe on their feet.  This 4th digit is usually pretty small, so I didn't want to use PVC pipe, so I just made the 4th toe out of aluminum foil. I also added claws on the ends of each toe with aluminum foil. 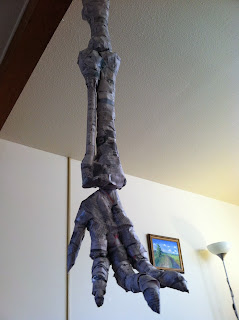 Here you can see the final fully prepped leg before I started the paper-mache.  For paper-mache I use a roughly 50/50 mix of warm water and white glue.  I did a few layers on the larger bones, but the small toe bones mostly just got one layer each.  Make sure you don't cover the ends of the PVC pipes with the paper-mache (you will need them open so that you can run a wire through them later).  Let the paper-mache dry overnight before painting. ideally. 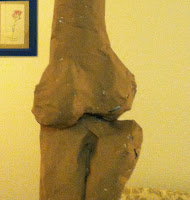 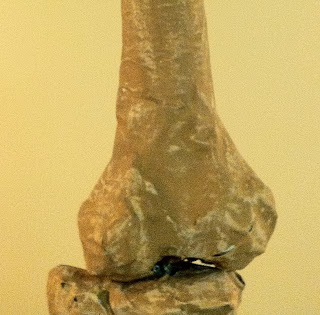 Painting the leg was very simple (though first I tried a variety of other options that did not work). I used cheap acrylic kids paints for the whole thing.  The paint scheme is:
1) Solid layer of brown paint.  2) Highlights using a mix of about 1/3 brown paint in 2/3 white paint.
The highlights are done by 'dry-brushing,' which is where you take the brush, dip it in paint, wipe off most of the paint, and then lightly run the brush along the surface of the bones so that only the bits that stick out the farthest will be painted. 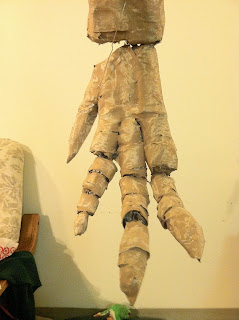 To further highlight the separation between bones, I did NOT dry-brushed the lighter brown color into the spaces where the bones meet (seen best in the foot, where I dry brushed along the original 3 pieces of PVC pipe but not the area between them that was covered by the paper-mache)

After painting, all that was left to do was mount the leg properly. The rope that runs through the entire leg was helpful in keeping the bones next to each other, but does not provide any rigidity to keep them in place.  To fix this, I took an old clothes hanger, straightened it out, ran it through the bones, and then bent it at each joint to make the appropriate pose.  I also poured some white glue into the pipes and at the points where the separate bone sections touch to help keep them in place.  The foot also needed a small piece of a thinner wire on the outside to keep in in the correct position (which I then painted brown so it would be more subtle).  Because of the small wire in the toes, they can be individually moved around.

**Embarrassingly, the final mounted version has an error! the middle bones (tibia/fibula) are backwards! The photos showing the pre-paper-mache and paper-mache versions have them correctly positioned.**