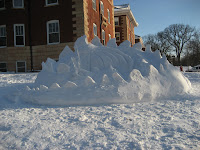 It's winter! Here's the break down on a giant snow dragon my friends and I made a few years ago during a snow day at college.  My basic idea was to make something which didn't require a lot from the snow.  The entire dragon is supported from below, so it cannot collapse (the base of the dragon is the widest part, and there are no overhanging sections that are not directly connected to the ground).  This all meant that the dragon could be made from relatively dry, non-packable snow, which is what was available.  I made a initial sketch of my idea, and then we started to work. 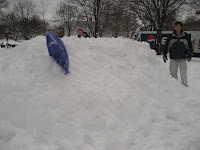 First we made a huge pile of snow.  Really the dimensions of the dragon were 'whatever we could pile up in a day,' and with four or five of us working we made quite a mound. 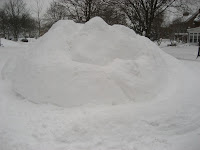 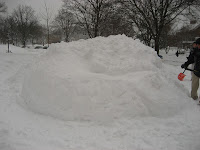 Next we compacted the snow a bit, then started the most basic carving.  This meant outlining the wings, head, neck, and base of the tail. 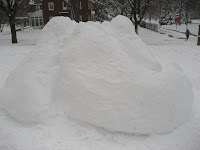 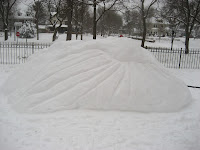 Once the whole basic structure was created, we started on detail carving.  This included the face of the dragon, the tines in the wings, and the end of the tail. 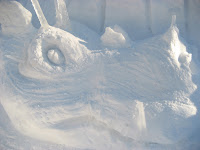 Now with the dragon carved, we added a few accessories.  Large icicles worked as horns and teeth.  We cut spikes out of snow for the back of the dragon by breaking out large pieces of the top layer of compacted snow.  This was possible because we had a large snowfall followed by a bit of slightly warm weather so the top few inches of the snow solidified and broke apart in sheets.   The final dragon is about five feet at the shoulder, not including the spikes.  Tons of fun overall, and a great way to spend a snow-day with friends. 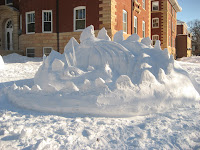 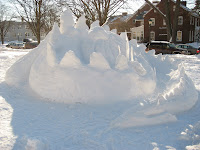 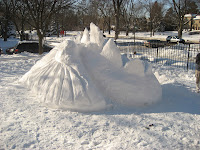